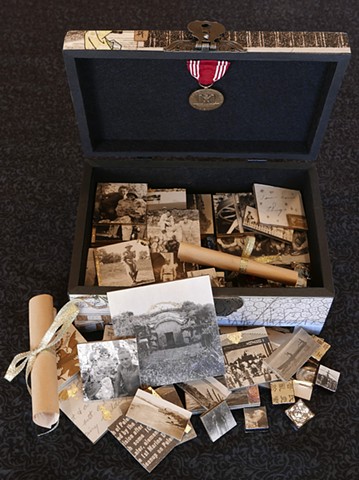 My father, Richard Robshaw (Richie, sometimes called Robbie) passed away when he was 47 and I was 13. In many ways, I never really got to know him. And like most soldiers, he never talked about “the Great War.” But many years after he died, my mother found three photo albums and a packet of papers in our attic. I tucked them away for another 20 years.

During the first year of the pandemic, I retrieved these photos and documents, began spending time with them, then transforming them into art of my own. It was a way of learning more about him, and somehow feeling a connection that I had never experienced.

Richie spent the years of 1943-1946 in the South Pacific. This man, who had only previously left Iowa to serve in the CCA during the Depression, was suddenly in places like Papua New Guinea, the Hebrides, and the Philippines. He was fascinated by the beauty of the South China Sea, the grass huts, and the native people. He trained as a mechanic and a rifleman, and fought in the bloody battle for Anguar Island. He spent the rest of the war on Okinawa, and was quartermaster for the troops and in charge of the Quonset hut where ice cream was made. I imagine this made him very popular.

But alongside the many photos of him and his buddies, there are scenes of devastation and death. His captions on the back of the images show how he struggled with this: the destruction of the island, the death of Japanese civilians, the loneliness. As I worked with these images and papers, a three-dimensional portrait of the man I never got to know began to emerge. I am grateful for that.